How Sweet (and Savory) It Is!

For a sweet and salty flavor combination that’s out of this world, you need to try Chef Jamie Gwen’s recipe for a Dulce de Leche and Cider glaze on your next Kentucky Legend ham.

Chef Jamie’s been a guest judge on “Master Chef” and a contestant on “Beat Bobby Flay” among many other food show appearances, so she knows an impressive recipe when she sees one—and this Dulce de Leche and Cider Glaze is one of those just-got-to-share kind of recipes.

Dulce de leche is that delicious confection, popular across Latin America and Southeast Asia, that‘s created by boiling milk until it turns into a sweet, caramel dessert sauce. Added to apple cider, apples, onions, some mustard and other spices, it creates a sweet-savory-tangy glaze that’s surprisingly irresistible on Kentucky Legend hams.

Chef Jamie’s recipe makes a glaze for one of our whole hams (~8lbs), though you could easily cut recipe in half to make the right amount for one of our smaller hams.

Watch Chef Jamie’s previous Facebook Live video showing how to make this glaze. Scroll below for full text of recipe. 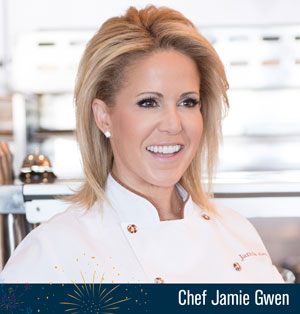 A graduate of both the Culinary Institute of America and Le Cordon Bleu in Paris, Jamie Gwen is a celebrity chef, syndicated radio host and cookbook author based in southern California. Chef Jamie’s been featured as a guest judge on “Master Chef” and competed on the Food Network show “Beat Bobby Flay.” Her other TV appearances include “The Martha Stewart Show,” “Emeril Live,” The Talk,” HGTV, HSN, Bravo TV, DIY Network and more.